The very professional Karnataka Institute of Cricket had us all excited when they started the Tournament on the first day of this year. More than 10 teams were to compete and here are the results of their clash.

Kioc All Stars Won the Toss and elected to field. In hindsight it was a stupid decision because the slammers, true to their name, put up 252 runs in 45 overs. The All stars, inspite of initial setbacks, almost made the score. But were restricted by the Slammers bowlers and were just short of the target. Joon with 3 wickets for 32 runs helped considerably. The All stars played well but it was not meant to be. The Slammers were through to the finals.

KIOC Kings Xi Won the Toss and elected to bat. They put up a good fight but they made a mediocre score of 233 runs at the end of 44 overs. The loss of early wickets seriously hampered the batting attack.

Pirates started well and were coasting to an easy win when they started losing wickets unnecessarily. Vimal Singh’s 3 wicket haul in the final phase of the match nearly turned things around for the Kings XI. With two ducks in the lower order and with only 5 overs left in the game, the pirates held their ground. They reached the target with 2 overs remaining and 2 wickets left. They had made it to the finals.

Kioc Slammers Won the Toss and elected to bat. It was a bad start with the openers falling without contributing significantly in terms of runs. The middle order held though, and Joon and Praveen made 50’s each. But Gouda finished off the lower order with a 4 wicket haul. Slammers were all out by the 35th over, making a defendable 238 runs.

The Pirates started very well, making a lot of runs quickly. Prakash and Gouda made 63 and 74 respectively. But after they were dismissed the batting order collapsed. Semwal’s 4 wickets were pivotal in turning the game around for the Slammers. From a scary position of looming defeat they managed to restrict the Pirates. Time was running out for the Pirates and in their desperate dash for runs they lost all their wickets. At the end of the innings the Pirates had 20 runs to make from 14 balls but zero batsmen left. It was a close finish but Slammers made it through in the end. It was a deserving win for them although both sides played well.

Congratulations to Karnataka Institute of Cricket Slammers, and good luck to all the teams for the coming year! 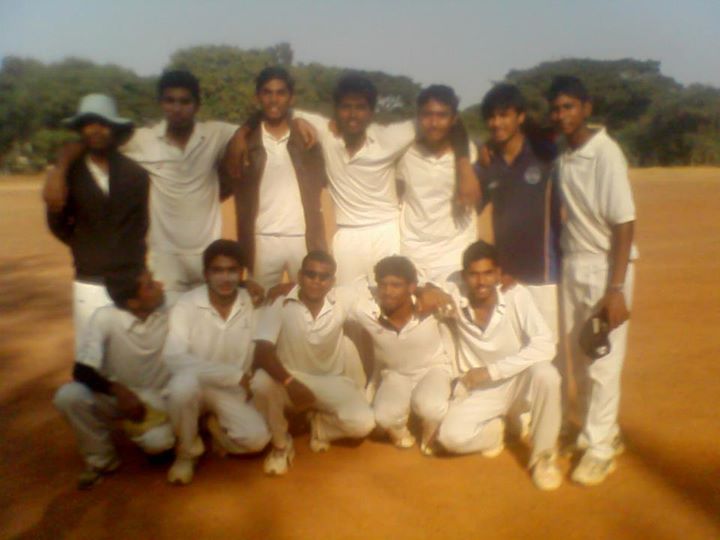 The Karnataka Institute of Cricket Pirates pose for the camera after coming second in the tournament. They fought well till the end.

Don’t forget to like the Chauka page on Facebook to get daily updates on other tournaments that are going on.

If you are planning a cricket match or a tournament, contact us at cricket@chauka.in. Or just download this free mobile app and start scoring.

Venkata Manoj Iragavarapu started Chauka in 2012, aiming to bring amateur cricketers together and to make it easier to play cricket.